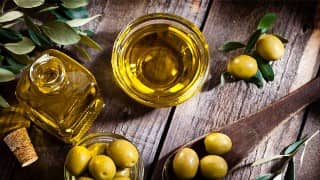 Are you accustomed to include olive oil when preparing your favorite meals ?

This oil, highly appreciated for its taste and subtle, delicate aroma, is the foundation of Mediterranean cooking or the Mediterranean diet.

The fact that extra virgin olive oil has medicinal properties when used internally and externally is no longer a secret !

We know, for example, that ‘a diet rich in olive oil has a protective effect against cancer, cardiovascular disease and aging. In fact, olive oil contains antioxidants of the polyphenol family beneficial for the cardiovascular system by increasing the good cholesterol (HDL) and lowering the bad (LDL).

Trivia : How Was Oleocanthal Discovered ?

U.S. Researchers found a chemical compound in olive oil which they named oleocanthal.

The discovery of oleocanthal is the result of pure coincidence. Gary Beauchamp, biologist at the Monell chemistry centre in Philadelphia, realized while conducting a conference on molecular gastronomy in Sicily that extra virgin olive oil produced a light irritation in the back of the throat similar to that cause by the oral administration of a known anti-steroidal anti-inflammatory ibuprofen drug (Nurofen ® or Advil ®).

Back in the United States, Gary Beauchamp and a group of scientists began to search in olive oil for the molecule responsible for these ibuprofen-like itching characteristics. Eventually they isolated it, and gave it the name oleocanthal, a name composed of three Greek roots (oleo = olive canth = irritation and al = aldehyde).

Oleocanthal is a natural substance which has the property of inhibiting the enzyme cyclooxygenase (COX -1 and COX -2), with, most importantly, the same pharmacological actions as those produced by the well-known medication ibuprofen. The results of this study were published in the scientific journal Nature. The group of scientists led by Gary Beauchamp noted that, like ibuprofen and aspirin, oleocanthal has anti-inflammatory and analgesic action.

What is the importance of anti-inflammatory effect of consuming olive oil ? The study found that extra virgin olive oil contains up to 200 micrograms oleocanthal per milliliter.

Taking into account the absorption coefficient (of 60-90%), we can deduce easily that the consumption of 50 ml or 4 tablespoons extra virgin olive oil has similar anti-inflammatory to a 10% dosage of ibuprofen recommended for adult pain relief.

The anti-inflammatory effect of consuming extra virgin olive oil may also play a significant role in the prevention of Alzheimer’s disease. One of the main causes of the development of Alzheimer’s disease is the formation in the brain of amyloid or senile plaques, composed of a peptide called a beta-amyloid.

A recent study showed that oleocanthal reduces the aggregation of the peptide beta-amyloid and its sticking to the neurons’ surface area, thereby slowing the development of Alzheimer’s disease.

Regular consumption of virgin olive oil can have long-term preventive effect in relation to many chronic inflammatory diseases, such as inflammatory rheumatoid arthritis, cardiovascular disease and even some kinds of cancers.

Do not hesitate to consume more of this ‘oil with a thousand virtues’ ! In this article, we mentioned extra virgin olive oil several times, which has the advantage of being richer in polyphenols than refined olive oil. It is an oil with an acidity level of less than 1 g per 100 g oil.