Chamomile Tea for Sleep - How to Cure Insomnia Naturally 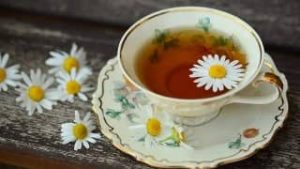 Do you ever happen to wake up frequently during the night ?

Is it difficult for you to fall asleep again after awakening ?

Looking for a simple and natural way to help you sleep better ?

Since time immemorial it has been customary to drink chamomile tea before going to bed to aid sleep. Is it really effective ? What do scientists say about this common plant in Europe ?

How does chamomile help one to sleep like a baby once more ?

The dried flowering tops of the plant are used. Both species of chamomile have substantially the same medicinal properties. However, German chamomile or scented mayweed is recognized as being a bit more powerful.

Some studies have shown that apigenin molecules have a common point with pharmaceutical specialties such as Valium ® and therefore are the main players in the antispasmodic effect, tranquilizers and hypnotic chamomile.

Chrysin, another flavonoid mentioned above, also contributes to the sleep effects.

When taken internally as a tea, chamomile is often used to treat mild sleep disorders and symptoms related to stress thanks to its mildly soporific effect. Acting as an antispasmodic, chamomile relaxes the nervous and muscular system.

Of course, chamomile also has other therapeutic advantages. This is a plant which can be used in cases of gastrointestinal, allergic and menstrual problems.

For external use chamomile acts as an anti -inflammatory and relieves skin irritations or those of the eyeball. It is also used in many hair treatments.

Disorders of Mild or Severe Insomnia ?

It is obvious that if you have a serious insomnia, chamomile certainly cannot help you much. In this case, it is best to consult a doctor. But if you suffer from mild insomnia, consider drinking a cup of chamomile before bedtime !

The use of chamomile tea is particularly useful for nervous children who do not readily sleep.

Other Herbal Remedies against Insomnia

The Eschscholzia californica (California poppy) is a plant with hypnotic effects that naturally suppresses difficulty falling asleep and contributes to sleep.

St. John’s Wort is a natural antidepressant and anxiolytic.

L-Tryptophan is an essential amino acid, a precursor of melatonin (the hormone of sleep) and serotonin. Therefore it promotes sleep and may decrease sleep latency by nearly half in cases of mild insomnia, even at low doses.