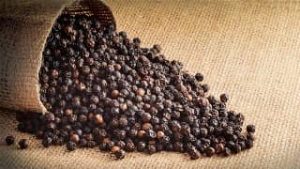 Black pepper produced from the still-green unripe drupes of the pepper plant, is one of the most widely used among spices. Peppercorn belongs to the family of piperaceae and known scientifically as Piper nigrum.

Is black pepper bad for you? What are some of the health benefits attributed to black pepper?

Black pepper is frequently used in medical purposes. A large number of studies on black pepper extracts and black pepper essential oil have been conducted in recent years.

Let’s see in detail the 10 main medicinal properties of black pepper that have been scientifically proven.

People who suffer from hypochlorhydria, a deficiency in hydrochloric acid produced by the stomach, have serious digestive problems. When the stomach is unable to produce enough hydrochloric acid, the body can’t absorb all the protein, trace elements and vitamin B12 from food. Low stomach acidity can lead to bacterial overgrowth or Candida yeast infection.

How does black pepper help digestion ? Black pepper stimulates the taste buds located in the lining of your mouth. Once stimulated, taste buds notify the stomach to increase its secretion of hydrochloric acid which aids in digestion. Hypochlorhydria causes excessive flatulence (wind, gas and bloating) as foods are fermented instead of being digested properly. Black pepper is a natural and home remedy for decreasing gas and bloating.

About 1% of the people could be affected by vitiligo. Vitiligo is a condition that causes depigmentation of sections of skin. The melanocytes, the cell located in its outer surface epidermis that makes pigment in the skin, are destroyed and as a result melanin cannot be produced. Vitiligo is characterized by the presence of white macules or patches of skin on the face (around the mouth, eyes, and nostrils), backs of hands, elbows, front of knees, axillae and genitals.

Breast cancer is the result of abnormal and uncontrolled cellular growth, cellular invasion into adjacent normal tissues. Cancer stem cells are the cells that allow tumors to keep growing.

Studies show that curcumin, the major component of turmeric, has phyto-estrogenic therapeutic activity that might contribute to prevent breast cancer metastasis.

Scientists say that piperine found in black pepper made the curcumin much more effective. Both natural compounds have chemopreventive properties against breast cancer. Curcumin and piperine inhibits or limit the self renewal of breast cancer stem cells.

4) Is Black Pepper a Natural Aphrodisiac ?

According to Vatsyayana, the Hindu author of the Kama Sutra, if a man, after anointing his lingam (Sanskrit word for the penis) with a mixture of the powders of the white thorn apple, the long pepper and, the black pepper, and honey, engages in sexual union with a woman, he makes her subject to his will.

Is black pepper an aphrodisiac spice? It has been reported that black pepper can exert a microvascular dilating effect on sexual organs, increasing for example blood pressure in the uterus.

We actually know that piperine, found in black pepper, may increase levels of CoQ10 in the blood. Coenzyme Q10 can increase blood flow throughout the body including the penis and can improve erectile dysfunction and impotence.

Depression affects about 10 percent of the U.S. population at some point in life. Low serotonin levels synthesized in the brain are believed to be linked to depression, anxiety, insomnia, feelings of worthlessness, food cravings and fear.

Serotonin or 5-HT is a neurotransmitter (a chemical which sends messages from one nerve cell to another) that plays a vital role in mood swings, emotional wellness, sleep, appetite and other behaviors.

A study in mice suggests that piperine produced a marked increase of 5-HT level (serotonin,) in both the hippocampus and frontal cortex. Piperine increases endorphins in the brain which helped to reduce pain and improve mood. Black pepper can therefore be used as a home remedy for mild depression and chronic mild stress because of its antidepressant properties.

Black pepper is used successfully in home remedy for cough by ayurvedic physicians. The chemical piperine, an alkaloid present in black pepper, is a good antibacterial remedy that stimulates circulation and mucus flow.

It opens up the throat and helps to relieve congestion. Many people in India use black pepper to cure respiratory disorders such as chesty cough (productive), dry cough (non-productive) and cold.

Scientists suggest that prostaglandin E2 (PGE2 or dinoprostone) is involved in the development of rheumatoid arthritis (RA) in humans. PGE2 has a role in increasing vasodilatation, inflammation, sensitivity to pain and fever generation. The inhibition of PGE2 production helps to control pain and inflammation, especially in patients with arthritis.

A new study has revealed that piperine present in black pepper, is able to reduce the production of PGE2. In rats, piperine significantly reduced arthritic symptoms within 4 days.

A study conducted by Rose, J.E. and Behm, F. in 1994, found that piperine, extracted from black pepper, can reduce symptoms associated with smoking withdrawal.

A study has revealed that piperine, the main alkaloid from black pepper, exerts cholinergic and antispasmodic actions. Black pepper extract has a laxative effect at lower doses, whereas at higher doses it causes antidiarrheal activities and constipation.