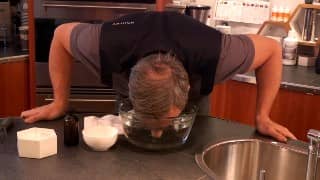 For about 15 years I had chronic sinusitis that would not go away. I was two days away from having the Roto-Rooter surgery schedule where they’re going to go in and to scrape out my sinuses even though that doesn’t have a great success rate because I was just tired of being sick all the time.

I read a book called “sinus survival” that taught me some really interesting things about what’s going on inside our sinuses and eventually came up with this technique out of ayurveda and I called the bulletproof sinus rinse and it makes your neti pot (A neti pot is a container designed to rinse debris or mucus from your nasal cavity) look like some kind of a wuss thing.

It’s way better than a neti pot or using a saline nasal spray both of which are good for your sinuses especially if you’re going to be flying, if it’s cold or flu season, if you are breathing a lot of dust, or you just feel like you’re on the edge of a cold.

So anytime there’s something going on that you don’t like, this is an amazing hack and I’ve never seen it written about before.

Advice : Do not use sugar! Don’t substitute honey or some other sweetener! Xylitol inhibits bacterial, his ability to stick to your teeth, your sinuses too. If you’re about to get an ear infection this can help you as well! So, it’s got to be real Xylitol.

Advice : I oftentimes use a lugol’s iodine which is a mix of two different kinds of iodine. I’ve also used iodine surgical scrub, a few drops of that have a detergent action that can break down biofilms, but it leaves your nose feeling a little tingly when you’re done. You just use a little bit of iodine.

You get warm water, have some tissues available because you’re going to need them, and you have Xylitol. How much? Tablespoon or two depends on how big your bowl is. This isn’t an exact science! The reason you have salt in the water is because regular water encourages bacteria and fungus growth and saltwater discouraged that.

How much salt do you put in there? Teaspoon or two. Add iodine is a very scientific process. A drop or two, maybe three of iodine.

You’re going to mix this up.

Now here’s the important part. You’re going to bend at the waist like a dippy bird and keep your head down. Your head’s down, you can suck the water up your nose like a straw.

The benefit of this, is that it creates suction, and it creates occurrence so water goes up through the sinuses and drops down in the back of your mouth and you can spit it out in the sink.

This method can stop a cold right before it happened. You do this before and after you get on airplane, it really makes a big difference.

And before I start snoring this stuff, there’s one other trick here that’s powerful and has to do with your immune system and what’s going on around your eyes.

Around each eye, there’s a huge network of bacteria and fungus and yeast that grows. There’s actually trigger your immune system, so if you’re looking to calm down the immune system one thing you can do is this: take a deep breath and blink in the water. Your eyes have been sterilized!

Next, I’m going to take a breath and I’m just going to basically suck some water up my nose and I’m going to spit in the sink and that’s going to wash my sinuses out. It’s gross but it works!

I do this when I land, if I’ve been on a long flight, if I have dry sinuses or if I feel like I’m about to get sick.

This is an amazing hack and if you’ve dealt with chronic sinusitis, you know how disabling it can be! I don’t get sinus infections. They’re very rare, maybe once every 3 or 4 years when I did something to deserve it. The rest of the time it’s just a non-issue and that used to be a monthly occurrence for me.