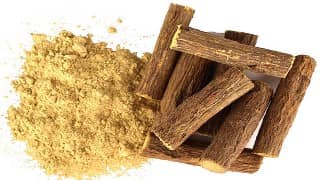 The therapeutic use of licorice (glycyrrhiza glabra) as known in China under the name Gan Cao, originates from the Roman Empire. The Greek Physician Hippocrates and the botanist Theophrastus extolled the digestive and conditioning benefits of licorice. The Naturalist Pliny the Younger also recommended this medicinal plant for calming coughs and as an expectorant. Licorice is also highly regarded in Chinese Physiotherapy.

Nowadays, licorice is cited as belonging to a group of plants that naturally reduce blood sugar levels. This herbal remedy can help to treat diabetes. Certain authors argue that the stick of licorice possesses hypoglycemic properties and that its consumption helps to lower the level of glucose or sugar in the blood.

But is the licorice stick really an effective ant diabetic remedy for the treatment of type 2 diabetes ? What does a German study reveal about this ?

Licorice stick and its benefits for Glycemia – Scientific Research

German scientists at the Max Planck Institute have discovered an antidiabetic molecule named amorfrutin in the roots of licorice. Licorice is a medicinal plant that could be used for the treatment of complex metabolic problems.

The results of the study actually show that amorfrutin not only lowers blood sugar levels but also has anti-inflammatory properties. According to studies conducted on mice, amorfrutin exerts a other therapeutic benefits because it can prevent also hepatic steatosis (fatty liver), that is a build-up of fats called triglycerides in the liver cells.

The PPAR gamma receptors (Peroxisome Proliferator Activated Receptor gamma) play an important role in the formation of fat cells and the metabolism of glucose.

Sascha Sauer, the head of the German Scientific team, explained that the amorfrutin modules contained in the roots of the licorice plant can activate the PPAR gamma receptors leading to genetic expression. As a result, there is a reduction in the plasma concentration of certain fatty acids and glucose (hypoglycemic action). The reduction of the blood sugar levels help prevent resistance to insulin, which is a major cause of adult diabetes.

Licorice – Advantages and limits of its use

« Even though there are already medicines on the market which stimulate the PPAR gamma receptors, they are not selective enough in their therapeutic actions and cause undesirable effects as weight gain and cardiovascular problems », explains Sacha Sauer. On the other hand, as studies conducted today prove, amorfrutins are molecules very well tolerated by the organism. Many persons would like to treat diabetes naturally with herbs.

But can a diabetic control his glycemia (blood sugar concentration) by the use of stick licorice, whether in an infusion or chewing it ?

« Drinking an infusion or chewing the sticks is not enough to treat diabetes », explains the scientist. The concentration of amorfrutin in a decoction or a stick of licorice is much too weak to be effective.

Process for extracting high concentrations of amorfrutin from licorice roots was developed by some researchers. These processes could be used in the future to produce the amorfrutin extracts on an industrial and pharmaceutics level.

How much dosage is appropriate for the use of dried licorice roots for phytotherapic treatment ? To cure naturally inflammation of the respiratory system and gastric ulcers (due to the glycyrrhizic acid that it contains), it should be consumed at the end of 3 meals : 2 to 5 grams of licorice powder in infusion or better yet in decoction. There are also tablets of licorice extract Bio for this purpose.

As we have already noted under the previous subtitle, the concentration of the substances with hypoglycemic properties (especially amorfrutin) enclosed in a stick of licorice is insufficient to notably reduce glycemia.

Medicinal use of licorice – Contraindications and drug interactions

Pregnant women or nursing mothers should not take licorice. An excess of glycyrrhizin another substance contained in the rhizomes off licorice, can trigger a premature birth during pregnancy. In phytotherapy or herbal medicine, never use licorice during more than 6 weeks (risk of provoking a syndrome of mineralocorticoid intoxication.

It is an Amazonian plant very much esteemed in natural medicine to stimulate the liver, renal and digestive functions. It is also an effective remedy for treating people with type 2 diabetes and whose blood sugar is high. The baccharis Trimera has, in effect, the property for reducing the level of glucose in the blood.