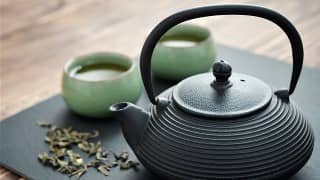 It has been thousands of years that many Asians have been consuming green tea daily. We now know that this plant has many medicinal properties, and that it affects the human body in many ways.

Would a person with Alzheimer’s disease benefit from regular consumption of green tea?

Many scientists agree that regularly consuming green tea may slow the progression of this devastating disease. If your spouse, your dad, your mom or a close member of your family suffers from this disease, you will certainly feel both totally helpless and frustrated, is that not so ? It is heartbreaking to see the symptoms worsen day after day!

Memory loss, difficulty in performing simple daily tasks, difficulty in expressing oneself in a consistent manner, and changes in mood and personality, are some of these devastating effects.

Hundreds of scientific studies have been done on the benefits of tea, and more specifically, on green tea.

It was revealed that green tea lowers cholesterol, inhibits cancer cells, reduces the appetite and strengthens the immune system. One reason for all the tea’s properties is related to its antioxidant components.

Recent studies have explained that green tea has the power to reduce senile plaques around the neurons in the brains of laboratory mice by up to 90%, which is absolutely fabulous!

Amyloid plaques are of generally observed in the brains of Alzheimer’s patients and they prevent the normal function of cells.

An antioxidant called ‘Epigallocatechin Gallate’ (EGCG) found in green tea prevents the development of these toxic proteins such as amyloid fibrils.

It is said that regular consumption of tea can, to some extent, prevent the symptoms of Alzheimer’s disease.

Could Green Tea Be So Healing ?

Until now, no serious study could not confirm the curative effect of green tea on Alzheimer’s symptoms.

We must also recognize that further scientific research on people with Alzheimer’s disease are needed. Obviously, just a few studies on animals are not enough!

Are you disappointed ? The knowledge that green tea can prevent and delay this terrible disease is already something great!

Make it a habit to drink a few cups of green tea every day! It’s pleasant, safe and especially beneficial to the health.

It is also possible to take GREEN TEA CAPSULES. These capsules are composed of green tea extract titrated to 95 % of polyphénols of which 30 % are epigallocatechin gallate or EGCG. One capsule provides as much as polyphenols and EGCG as 4 cups of unfermented green tea.