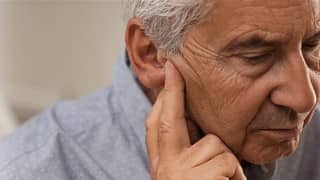 » I woke up with severe pain in the right ear. My husband told me that the ear canal was swollen. I no longer hear well from that ear, but I do not have a fever. I took ibuprofen but it only gave me temporary relief. Which natural home remedy could bring me lasting relief and disenflame the painful ear ? «

Ear pain can have many different causes. The pain may be in the inner or outer ear and may be accompanied by inflammation, infection, pus or simply a slight deafness.

Before using a simple and natural remedy for ear pain, we must first identify some underlying causes. That is why we will start by listing the common causes of the symptoms of the painful ear and then we will give some examples of conventional treatments. Finally, you will find home solutions and homeopathic remedies for treating some cases of earache.

Ear pain and the 17 most frequent causes

External otitis is sometimes manifested by a sometimes intense pain in the ear canal. Prolonged in the ear canal moisture is a factor which sometimes leads to infection and inflammation of the surrounding tissue, which is why this disease is often called swimmer’s ear. External otitis is accompanied by hearing loss and sometimes fever. In some cases, the patient has a purulent discharge (otorrhea), that is to say, oozes a yellowish and smelly discharge.

Otitis media is a bacterial or viral infection, located behind the eardrum, which is accompanied by earache (ear pain) and fever. It affects more children before the age of 6 years. In most cases, otitis media heals spontaneously in a few days. Otitis media is called ‘acute’ when it does not last long (1-2 weeks) and ‘persistent’ if the same symptoms remain beyond a period of 6 weeks. If the fluid does not go away and stays longer than 3 months , otitis then becomes ‘serious’.

3) Abscess of the External Auditory Duct

A bump, a small boil or abscess may occur in the external auditory canal of the ear, causing swelling, inflammation and earache or a pain more or less to the touch.

4) Perforation of the Eardrum

Trauma or otitis media can lead to perforation of the eardrum, the membrane that separates the outer ear from the middle ear. The tearing of the eardrum is usually accompanied by severe pain, reduced hearing and sometimes tinnitus (buzzing or whistling). The eardrum heals and repairs itself alone in the majority of cases.

Earwax or wax in the ear can cause wheezing, tinnitus, hearing loss and sometimes pain in the ear.

As its name suggests, barotrauma is a trauma that affects an organ that has air cavities. In the case of the middle ear, the barotrauma may affect the tympanic membrane due to too rapid changes in the external pressure due to a change in altitude or depth. Have you ever felt pain in the ears when in an airplane or when scuba diving ?

Mastoid is the end of the temporal bone behind the ear pinna. This cancellous bone contains air cavities which communicate with the tympanic cavity by means of a small canal. Because of prolonged or inadequately treated otitis, the mastoid bone may be infected and painfully inflamed. The skin is stretched and red behind the pavilion, it hurts to touch.

The Ramsay Hunt syndrome is a disease that occurs when the nerves innervating the area near the ear are affected by a viral infection called zona. This is the same virus that causes chickenpox in children. The patient complains of pain in the ear, facial paralysis, and there are pus-filled boils in the ear canal. Other associated symptoms include hearing loss (partial deafness), ringing in the ears (tinnitus) , dizziness and taste disorders (loss of taste).

13) Foreign Objects in the Ear Canal

In the case of children, they may complain of pain in the ear due to a foreign body in the ear canal. This may be a bug, a small toy, a pearl or any small object.

Do you have toothache on the same side as the ear pain ? Pain from a tooth due to decay or even abscess or gingivitis may radiate to the ear that is on the same side, especially when chewing food.

Angina is an acute inflammation of the throat and tonsils caused by a viral or bacterial infection. Angina is accompanied by fever and the patient may also complain of sore ears.

The cervical spondylosis caused by wear of the cartilage of the cervical vertebrae may be accompanied by headache, earache, vertigo, tinnitus and pain in the shoulder or arm.

In the case of external acute otitis, the treatment is based on the local application (ear solution) for 7 to 10 days of antibiotics (eg Oflocet ®, Ciloxan ®, Cortifra ®, polydexa ®) and systemically taking an analgesic against pain.

To treat otitis media, antibiotics (amoxicillin or very often Cefprozil, Azithromycin in patients allergic to penicillin) as well as pain relievers such as ibuprofen, are usually taken orally.

If antibiotics are not effective, the treatment of mastoiditis may include the drainage of the middle ear by the eardrum. This minor surgery is called ‘paracentesis’.

Most natural remedies listed below may help reduce some symptoms of ear pain :

Apply a warm compress on the ear to relieve pain before consulting an ENT specialist.

This natural remedy can relieve pain if for some reason you are unable to consult a doctor immediately. Cool a little oil in a water bath and insert a few drops of olive oil into the ear canal. Olive oil is also useful to soften earwax and thus to get rid of it.

The allicin content in garlic natural compound has antimicrobial properties that can aid the healing process of tissues. In a bowl, put 3 cloves of garlic in a little olive oil and place it in the microwave. Let the oil heat for 30 seconds to a minute so that it absorbs the active ingredients in the garlic. Then pour some warm garlic oil drops in the painful ear which may be slightly infected. Again, this remedy is to be used if, where you live, there is no way to see a doctor quickly.

4) Remedy to open the Eustachian tubes

In a bowl of boiling water, add a few drops of eucalyptus essential oil or a teaspoon Viks ®. Place a towel over your head and inhale the steam treatment. Repeat this 3 times per day. This is a trick that some patients wanted to share. This natural home remedy helps open the Eustachian tubes, thereby relieving pressure and reducing ear pain.

Here are some references of homeopathic remedies among the employees:

Aconitum napellus (9 CH) is a homeopathic remedy that is useful in the early stages of an ear infection , especially after exposure to cold, dry air. Symptoms appear suddenly : The patient is restless, anxious, and very thirsty. The ear is red and sensitive to touch. The pain is worse at night, especially between noon and 2am.

A homeopathic treatment with Belladonna is effective in patients (adults or children) who complain of severe pain most often in the right ear, with fever and headaches. There is often the first symptoms of a cold. The ear is swollen and red. There is no pus at this point. The lymph nodes are swollen. The patient’s eyes are glassy and the pupils are dilated. The typical patient who responds well to homeopathic remedy has disturbed sleep and even nightmares. Even with the manifestation of fever, he always has cold hands and feet. He prefers the dark. He prefers to sit rather than lie. The pain is stronger in the presence of light, noise and cold.

Chamomile is a very appropriate homeopathic medicine to treat children who scream and cry because of severe pain in the ear. The child is very irritated and doesn’t want to be touched or consoled. Earaches can occur during teething along with a clear and often watery nasal discharge.

Homeopaths prescribe Hepar sulphuricum especially in cases of chronic ear infections when the pain is intense. There is often a yellow, thick discharge from the ears or nose. This remedy is especially suitable for patients, whether, children or adults, who get angry easily and who hate the cold. The symptoms are aggravated by cold air and often improved by heat during the night.

If you or your child are sick and tired of feeling miserable and run down, if your ear is red raw and swollen and you’ve finally had a gut full of ear aches and ear infections… then this could be the most important Ebook you’ve read all year.

My name’s Elizabeth Noble and I’m a qualified naturopath here in Sydney. I know first hand just how terrible it can be to suffer from the relentless pain of an ear infection. I know, because several years ago, I was where you are now. In my case I was struggling to help my very sick 2 year old son, who was battling with painful recurrent ear infections.

I then passionately researched every possible natural treatment for ear aches and infections that I could find. I studied how to boost up my child’s immune system so he wouldn’t succumb to every infection that came along. I discovered that the majority of children with chronic ear infections are able to avoid surgery by avoiding foods to which they are allergic to. I also learned about many very simple natural remedies that start to work on the painful symptoms almost immediately. I wish I had known this from the start. It would have saved a lot of pain and heartache.

« Nature’s Amazing Ear Infection Cures » is an e-book that arrives to you in electronic form in minutes. You can read it on screen, or simply press the print button, and it will print a copy right on your printer.