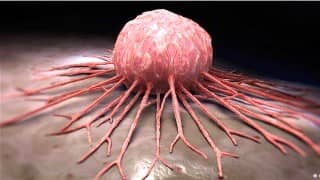 Cancer can be a really scary thing because it seems so totally out of control. But what if you have more control over cancer than you’ve been led to believe.

I want to go over 10 signs of cancer. Finding cancer early is key to successful treatment. Know your body and watch for these symptoms.

There are a million different things that can cause fatigue! But cancer is one of them, especially if it’s not helped by sleep or rest, if it’s not going away and if you still have it like over a period of six months. Then that could definitely be a problem.

A couple of reasons would be that the cancer growing. The cancer is using up some resources in your body and the other hand your body’s immune system is busy fighting this cancer and defeating it. So it’s like there’s this war going on that’s using up resources.

But remember don’t jump to conclusions because most commonly fatigue is caused by things like stress and poor nutrition.

Things like headaches and back pain and especially if it’s chronic, if it goes on for a long long time and if it’s not changing with body positions. If you have a back pain for example, very often you can find at least some position where you sit or lay down or you lean or you do something where you reduce or relieve the pain.

But if it’s was call the “space occupying lesion” where it’s a growth that’s putting pressure on something, you may not be able to find any position that gives relief and that would be a bad thing.

This is one many people are aware. Women are encouraged to self-examine their breasts on a regular basis and if you find a breast lump it could indicate a growth that could be cancer. But most of the time it is a benign growth, it’s a fibrous gross often called a fibroadenoma or a cyst.

It’s not just women who can get breast cancer, it is increasing in men as well! It’s not as common as in women but it’s quite common in men as well. Men can also get lumps and growths on their testicles so that’s another sign of testicular cancer is if you find a little irregular growth on your testicle.

As many as 40% of people for first diagnosed with cancer have experienced some recent weight loss. It’s not that it’s dangerous to lose weight, this weight loss is due to a disease process. This weight loss is usually rapid and unexplained. It’s not that someone is trying to lose weight! it’s often but not always associated with a loss of healthy appetite. The body just doesn’t have the balance and the resources to process food. It is too far gone and then you don’t have much of an appetite anymore. In later stages of cancer there’s also something called cachexia which is wasting, and this goes far beyond just weight loss. This is where your body is completely wasting away basically and this happens in as many as 80% of late-stage cancer.

That would usually be a low-grade fever in the absence of you having a cold or a flu. It’s something that won’t go away. It persists for weeks. It may not be there all the time and could come and go during different times of the day but it’s very persistent. Usually if you get fever in the early stages of the disease process that means it’s a blood-borne cancer like lymphoma or leukemia. But if it comes in the later stages more advanced stages of cancer then it would be something other than a blood-borne.

Here’s another one that a lot of people are aware of. If you have moles that start changing you got to watch out. There’s an ABC for this.

“A” means Asymmetry Side to Side, so if you look at it and one side is kind of round and regular and the other starts looking different then that’s a bad sign.

“B” is Border Irregular, so anywhere around it where it’s not smooth, it starts changing and becoming irregular that’s not a good thing.

“C” means Uneven Color so if you look throughout the mole and its uniform that’s a good thing but if it’s kind of spotty and different colors not so good.

“D” is Diameter that’s the size of it. So if you look at it and it’s larger than the diameter of a pencil then that’s something to watch out for.

And “E” would be evolving. It means it’s changing. You can have it for 20 years but in the last year it looks different, that’s something that you want to get checked out.

If you have diarrhea, constipation, if there’s blood in the stool, if your stool is black and tarry, if you get abdominal pains, were bloating, these could indicate a cancer or colon cancer.

But as you probably know, you shouldn’t jump to conclusions because these are extremely commons, so don’t just look in this and say oh my God I have this! Most of the time it’s going to be due to things like food intolerances, small intestine bacterial overgrowth, or other imbalances in your biome, in your bacterial Flora. Could be a leaky gut with gut inflammation or ulcers can also cause blood in the stool or black and tarry stool.

Dysphagia simply means trouble swallowing. If you have trouble with that, it could indicate that you have an esophageal cancer thyroid vocal cord or a throat cancer. Because any of those could grow a lump of some sort that makes it more difficult to swallow! However, it’s much more common that it is something not so serious like gastroesophageal reflux disease or GERD which is irritation of the esophagus by acid. And it can also be something called of goiter which is an enlargement of the thyroid gland. It’s benign enlargement is in people who are severely deficient in iodine and the body does compensate by growing the thyroid into a lump that could interfere with swallowing.

Mostly caused by smoking could lead to lung cancer. But just like other cancers, it doesn’t happen overnight. Smokers will have years and years of chronic cough called chronic bronchitis as the inside membranes in the Cilia of their windpipes start degenerating from that irritation from the smoke and go through these stages of progressive mutations.

So we do have a lot of warning signals in some cases and the smart thing would be to start listening to those warning signals. Most coughing though especially if it doesn’t last for months and years would be a respiratory tract infection like a cold or a flu.

Now hopefully with a cold or flu the cough shouldn’t be over in a couple of weeks, but you could have some persistent infections where your body can’t clear it all the way and even though your relatively healthy that you still have that irritating cough for months.

What Exactly Is Shaolin Qigong and How Can It Help You?

Shaolin Qigong is the best kept stay young, stay healthy, stay happy, energy secret in the world today. It only takes 10-15 minutes to practice and is the art of deliberately managing your ‘vital’ energy to help you live a happier, healthier and longer life. Vital energy (Qi or Chi) is the life force that keeps us all alive.

Qigong requires virtually zero athleticism, can be practiced almost anywhere and does not require any expensive supplements, pills or exercise gizmos.

Qigong has been proven to: