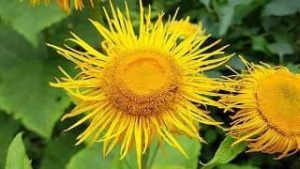 Wild Sunflower (Elecampane) is a perennial herb with a large rhizome.

Originally from south-eastern Europe and western Asia, this plant is now naturalized in Britain and on the east coast of the United States.

In France, it grows freely in Lorraine and the Ardennes. Elecampane belongs to the Asteraceae (Compositae) family and its botanical name is Inula helenium. The genus Inula has no less than 90 species.

Wild Sunflower is a medicinal plant that has many synonyms in English. Inula helenium Elecampane is known by the following common names: Elfdock, Horse-Elder, Horseheal, Scabwort, Velvet Dock, Wild Sunflower and Yellow Starwort.

In herbal medicine, Inula helenium (Wild Sunflower) is primarily an asthma remedy and expectorant. Elecampane has antibiotic properties and is useful for treating parasites and intestinal worms. Recent studies have demonstrated that the medicinal plant has anti-inflammatory and anti-tumor properties.

The root and rhizome of elecampane contain a high amount of inulin (44 %) and many other polysaccharides. Inula helenium contains mucilage, bitter components, sterols (sitosterol, stigmasterol), saponins, resins, alkaloids and essential oils that are composed of sesquiterpene lactones such as: alantolactone ,isoalantolactone ,dihydroisoalantolactone, dihydroalantolactone and isocostunolide.

Within the ancestral medicinal traditions passed down from generation to generation, our elders used the infusion of the elecampane roots to treat respiratory conditions such as asthma, bronchitis, and whooping cough disease.

According to Dr. Andrew Pacholyk, a specialist in traditional Oriental medicine, the elecampane root (Inula helenium ) is really effective for preventing or treating asthma in asthmatics.

Scientists believe that inulin, an indigestible carbohydrate contained in Wild Sunflower, plays a major role in improving the symptoms of asthma, bronchitis and coughs.

During an asthma attack, the bronchial walls become inflamed and swollen and the opening of the bronchi is reduced considerably, obstructing the passage of air and causing an annoying breathlessness or panting. Inulin coats and soothes the lining of the airways and acts as an expectorant.

Furthermore, the sesquiterpene lactones present in Inula helenium have a natural antibiotic effect that may be useful in treating bacterial respiratory infections effect.

The Elecampane is also known to stimulate the immune system.

A recent American research on treatment against tuberculosis, revealed that elecampane root extract is able to inhibit the in vitro growth of Mycobacterium tuberculosis.

➤ Smokers syrup (elecampane and horehound syrup) is shown to help to fight against smokers cough and strengthens the lungs by cleansing it of the layer of tar accumulated over the years.

The alantolactone contained in the essential oil extracted from the roots of Inula helenium has anthelmintic and anti-parasitic properties.

The alantolactone is a molecule which is effective to destroy and expel parasites from the intestine such as the roundworm, pinworm, hookworm, whipworm and giardia. At a dilution of 1:1000, the elecampane extract kills the Ascaris roundworm after 16 hours.

The elecampane extract also exerts anthelmintic activity against liver fluke (Fasciola hepatica) which is common in sheep and horses and which can eventually infect humans.

Inula helenium is a medicinal plant that has long been used to treat scabies in sheep and horses, herpes, and other skin infections.

Nowadays, some herbalists recommend the therapeutic use of elecampane to treat certain skin problems like acne (especially for treating acne scars), dermatitis or eczema, skin itching and irritation on the face or body.

We must not forget that the sesquiterpene lactones present in the root of Elecampane performs an antibacterial and antifungal action in vitro. These molecules have a very powerful anti-staphylococcal action.

In South Korea, researchers found that elecampane has an anti-inflammatory and anti-tumor effect.

ORL Cancer: An extract of Inula helenium can induce the suppression of cell growth and cell apoptosis (programmed cell death) in oral cancer cells. KB is a cell line derived from a human carcinoma of the nasopharynx (nasal pharynx).

Colon cancer, breast cancer and pancreatic cancer: In another study, the researchers demonstrated that an extract prepared from the roots of Inula helenium has a remarkable antineoplastic activity.

This extract has revealed a highly selective toxicity toward four different lines of cell tumors (HT-29, MCF-7, Capan-2 and G1), but a much lower toxicity against the peripheral blood lymphocytes from two donors.

Skin cancer (melanoma A2058): Scientists from Taiwan found that sesquiterpene lactones isolated from the roots of Wild Sunflower works against A2058 cell tumors or skin cancer.

The use of elecampane, its side effects and warnings

Elecampane is not recommended for pregnant and breastfeeding women (it stimulates uterine contractions). Consuming Elecampane in large quantities is also warned against in people with diabetes or those who suffer from heart problems.

Misusing the medicinal plant Inula helenium can cause diarrhea, vomiting, cramps, spasms, feeling unusual heartbeat and even symptoms of paralysis. Wild Sunflower may cause allergic skin reactions in some people.