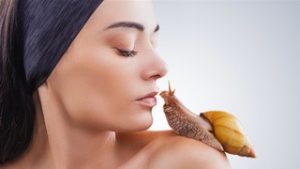 Exposure to ultraviolet rays, the climate (cold or excessive heat), diet, genetic makeup and psycho-emotional conditions are some of the factors that accelerate the appearance of wrinkles.

Are you looking for a natural remedy to try to remove wrinkles, acne scars or burns which you have on the face or any other visible body part ?

Are you looking for an effective and natural treatment for fading and even removing stretch marks on the thighs, hips, belly or breasts due to pregnancy, weight change or an endocrine disease?

One proven solution is using the anti-wrinkle and anti-stretch mark properties of snail slime.

Find out the therapeutic role played by each of the active components of snail slime in more detail :

Scientific studies have demonstrated that the allantoin contained in the snail slime, also known by the chemical name glioxil diurea, stimulates epithelialization (reconstruction of the epithelium) of the skin by stimulating cell proliferation. Allantoin helps to remove dead cells of necrotic tissue and acts on the regeneration of new cells.

In addition, allantoin has a protective effect on the skin, preventing chemicals contained in some soaps and skin care oils abusing the skin. Allantoin is a natural anti-irritant. The Food and Drug Administration (FDA: American equivalent of the AFSSAPS : French Agency for Sanitary Safety of Health Products ) approves the use of allantoin in various ways to keep the skin healthy.

The snail slime contains vitamins and proteins that the mollusk gets through his vegetable diet. Protein helps to nourish the skin and make it softer. Vitamins strengthen the action of natural antibiotics in the saliva.

*** Trivia ***: The Chilean snail farmers were the first to discover the benefits of snail slime, observing that, as a result of daily contact with snail slime, wounds on the hands healed faster and the skin became particularly soft to the touch.

The natural antibiotics found in snail slime are substances able to fight infections caused by bacteria usually present on the skin such as Staphylococcus aureus, Escherichia coli, Pseudomonas aeruginosa, the bacteria involved in acne.

These two important ingredients of the connective tissue of the skin are also found in the extract of snail slime. Collagen is an essential part of the dermis that gives the skin softness and firmness, especially when it is associated with elastin.

Elastin prevents aging of the skin. As its name implies, elastin allows tissues to stretch and return to their initial state after stretching, which gives them flexibility.

Glycolic acid exfoliates and allows peeling (desquamation), removing dead cells that are found on the skin. Also, more importantly, glycolic acid contributes to other components penetrating through the hair follicles to exert their therapeutic properties on the deeper layers of the skin.

Dermatologists and pharmacists recognize the effectiveness of snail slime on wrinkles and stretch marks, but recommend choosing cosmetics made with slime extracted from stressed snails.

Know that the slime the snail secretes just to get around does not have the same medicinal properties as the slime it secretes for the sole purpose of treating its skin due to various external aggressions.

All products that found on the pharmaceutical market are not necessarily quality products. The quality criteria for snail based products depend on the type used, the extraction method of the slime, the development of cosmetic and analyzes that ensure the medicinal product in question.

All creams containing snail slime are not identical and therefore do not have the same therapeutic effects on wrinkles and stretch marks.

According to a 2004 study on a sample of individuals, 26.7 % of those treated with snail slime have seen a gradual and progressive reduction of fine lines, and 45.5% of them have seen a significant improvement in deep wrinkles.

Furthermore, all have had a significant improvement in their skin condition, with it becoming much less dry and rough.

Armonia snail facial serum is a refreshing pellet based on concentrated snail slime.

The Armonia facial serum from the snail secretion is a concentrated regenerative serum based on the concentrated extracts of snail slime.

A dermatological study on 30 women of 35 to 70 years during 28 days, with an instrumental evaluation carried out by Dr Cristina Pascual -Montse de Pera-Nur in Barcelona, showed that the Armonia snail slime based cream:

➤ Exerts an anti-wrinkle effect on 80% of women

➤ Leaves the skin of 93% of women softer and finer

➤ Leaves the skin of 90% of women more flexible and elastic

➤ Has a de-pigmenting effect on 63% of women

Press The Rewind Button On Aging From the Inside-Out

Master a powerful, anti-aging Shiatsu routine that helps generate lymphatic circulation and gives you a natural facelift. (You won’t believe how easy it is to diminish that swelling around your eyes… or the puffy, blotchy complexion that drives you crazy.)

➤ Press The Rewind Button On Aging From the Inside-Out