Riboflavin for Migraines - Vitamin B2 Benefits 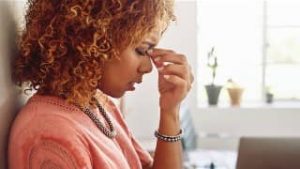 Migraine is a particular form of headache responsible for violent and throbbing pain localized to the half of the skull. A migraine attack lasts several hours and can last up to 3 days.

The frequency of attacks varies from one individual to another, but it is estimated that one in five is affected by this disease with other symptoms such as nausea, mood disorders, fatigue, and an intolerance to noise and light.

There are some natural solutions to relieve or reduce migraines.

In this article, we will talk about the anti-migraine virtues of vitamin B2.

Vitamin B2 – Main functions in the body

Riboflavin, also known as vitamin B2, is found in certain foods and dietary supplements. It helps protect cells against oxidative damage and is involved in energy production.

Anti-migraine action and properties of riboflavin (vitamin B2)

Metabolites of vitamin B2 such as FAD (flavin adenine dinucleotide) are cofactors in the Krebs cycle involved in energy production. This coenzyme is an important part of the electron transport chain. This is a crucial function as a deficiency in mitochondrial energy reserves has been observed in migraine sufferers and patients with low cerebral vascular tone.

When a migraine sufferer ingests significant amounts of vitamin B2, it prevents migraine attacks by restoring mitochondrial energy reserves.

Multiple studies have demonstrated that high doses of riboflavin may reduce the frequency and severity of migraines in adults and children. While women experience migraine attacks three times more than men, a treatment based riboflavin benefits both sexes.

In a study to assess the effectiveness of riboflavin in migraine prevention, 59 percent of patients who had taken 400 mg of riboflavin per day for three months showed a reduction of 50 % of migraine attacks.

Riboflavin is a prophylactic vitamin well tolerated by the body and relatively effective in children and adolescents with migraine.

Is Vitamin B2 a curative or preventive anti- migraine natural cure? Riboflavin is an effective treatment for migraine prevention. Vitamin B2 significantly reduces the occurrence of migraine attacks when taken in a large amounts of about 400 mg per day.

On the other hand, riboflavin does not seem to help reduce the pain or duration of a migraine headache after it occurs. Vitamin B2 is therefore not a cure against migraine.

Vitamin B2 supplements – Dosage and recommendations

Minor side effects resulting from taking high doses of riboflavin include diarrhea and polyuria.

The best food sources of vitamin B 12

The Migraine And Headache Program!

You can have the same program that I got. It’s tried, it’s tested. And it’s easy.

I didn’t need to go out and buy any equipment.

I didn’t need to join a gym – thank goodness.

I just stayed at home and did the exercises at odd moments during the day.

A couple I did while watching television.

Life didn’t stop for these exercises. I just incorporated them into my daily routine.

Now, I do one or two a day at most. I vary them throughout the week.

By maintaining that basic flexibility and balance I know I’m protecting myself for the rest of my life.

I really couldn’t be happier.

Yours is waiting – click below and get it now.

➤ The Migraine And Headache Program!