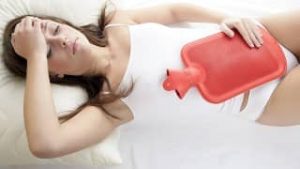 Do you suffer from the effects of premenstrual syndrome (PMS) ?

No laboratory test is able to diagnose PMS. Nevertheless, it is assigned some 150 different symptoms.

Would you like to know a natural treatment that can relieve you of all these evils ? On the other hand, if you’re one of the women who suffer from painful menstruation, you want an effective natural remedy (medicinal herb) to avoid the adverse effects of non-steroidal anti-inflammatory drugs and feel better.

Mugwort (Sagebrush) can certainly do you a great service in this respect.

Let us see how.

Mugwort – Botanical Name of the Plant and Active Components

Mugwort is a perennial herb that can easily be found in the wild, for example on the roadside or along railways.

Its botanical name in Latin is Artemisia vulgaris.

It aids digestion, it is antispasmodic (calms uterine pain by acting specifically on the smooth muscles of the uterus) and emmenagogic (that is to say, it causes the periods regulating the menstrual cycle).

That is why this plant is very useful for women whose cycle is irregular or absent (as in the case of amenorrhea), for those suffering from premenstrual syndrome, premenopausal women, and all those who suffer from menstrual cramps and pelvic congestive conditions associated with abdominal pain.

There are two main forms of administration of Mugwort (Artemisia vulgaris).

The first is to take capsules containing the total powder made from its leaves and flowering tops, in a micronized and cryo-ground form. The dose is usually 1 g three times a day before meals.

The second way of taking it is to drink it in a tea.

Prepare by brewing 25 grams of its dried leaves and flowering tops in one liter of boiling water for 10 to 15 minutes. Drink a cup in the morning, afternoon and evening before meals.

In some cases, herbal treatment with the mugwort is done during the second part (presumed) of the cycle, that is to say, the 15th day of the cycle until the arrival of the next menstrual cycle during several months, until one is cured or the symptoms disappear.

Mugwort – Side Effects and Contraindications

• Like most plants, Sagebrush is harmless only within the recommended dosage. An excessive dosage of Sagebrush is toxic!

• Also, be aware that this plant is not recommended for pregnant and lactating women!

Beyond the circadian rhythms that regulate their therms, sleep and digestion, women are subjected to another biological clock: that of their hormonal cycle.

Some scientists believe that the symptoms of premenstrual syndrome may be due to a hormonal imbalance between serotonin and melatonin.

A few sessions of therapy before the onset of symptoms could make them disappear in some cases.