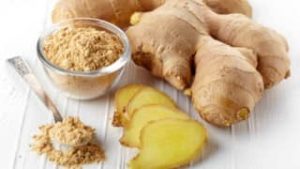 Whether fresh or dried, sliced or ground, ginger is a condiment used to flavor exotic dishes, some sauces, beverages, fruit salads, pastries, etc.

In recent years, many scientific studies have been conducted to explore the therapeutic benefits of ginger.

I invite you to discover nine virtues and properties of the ginger rhizome.

Ginger – Brief Description of the Plant

Ginger (Zingiber officinale) is a perennial plant that belongs to the ginger family. Native to Asia, ginger is best known for its thick rhizome plant, the underground part of the stem, which is widely used in cooking (condiment) and alternative medicine (aromatherapy and phytotherapy).

It is interesting to note that the word ginger comes from the Sanskrit ‘shringavera’ which means « like the deer’s antlers » to illustrate the shape of a hinged rhizome.

The best quality varieties of ginger come from Australia, India and Jamaica, while the most cultivated varieties and the most traded come from China and Peru. The smell and taste of ginger rhizome are characteristic: spicy, peppery and lemony.

The Active Ingredients Enclosed in the Ginger Rhizome

Ginger contains more than 200 substances in its oils, which is why it has so many different uses in natural medicine!

Discover the medicinal properties of ginger as recognized by the scientific community. What are the benefits of ginger for arthritis, cholesterol, migraine, nausea, vomiting, tumors, menstrual cramps, colds, stomach ulcer and libido ?

The eugenol contained in the essential oil of ginger as well as in the essential oil of cloves has all the characteristics of a natural anti-inflammatory drug. Scientists administered eugenol orally to rats suffering from a severe arthritis in the knee and leg. The benefits of this natural remedy were visible after 26 days of treatment: the local inflammation having decreased significantly !

Several clinical trials (in humans this time) have found that taking 250 mg of ginger extract 4 times a day reduces the pain of knee arthritis after 3 months of treatment. Ginger also relieves rheumatoid arthritis, osteoarthritis and joint pain of unknown origin.

Numerous studies have been published on the cholesterol-lowering effects of ginger. Research in animals, especially rabbits with hypercholesterolemia, revealed that an alcoholic ginger extract is capable of considerably reducing serum cholesterol levels. These results were compared with gemfibrozil (Lipur ®), a classic lipid-lowering medication often prescribed for patients who suffer from high cholesterol.

Ginger exerts an anti-atherogenic action on the body which is associated with a significant reduction in the plasma concentrations of LDL cholesterol and their sensitivity to oxidation and aggregation.

Since ginger helps to prevent the formation of blood clots, it may be useful in the treatment of heart disease or stroke (cerebrovascular accidents).

Since ancient times, ginger has been traditionally recommended to stimulate sexual desire (libido) in men as well as in women. Is ginger really an aphrodisiac remedy ?

In a study, scientists administered a ginger extract in male rats and found that serum testosterone levels had increased as well as the weight of their testicles.

It is possible that ginger could have a similar effect on human health, but it will need to be verified in the future by clinical studies on humans this time.

Aphrodisiac recipe: Infuse a teaspoon of grated fresh ginger in a cup of hot water.

A 1990 report from the Institute of Biology of Odense University in Denmark presents ginger as an effective remedy against migraines. After classifying migraine as a neurological disorder, this study demonstrates that ginger can stop a migraine or relieve symptoms by blocking the prostaglandins that may contribute to migraine. Further research is needed to confirm this medicinal property.

Ginger is a natural remedy with anti-emetic properties, that is to say it can treat nausea and vomiting. What evidence do we have that ginger is an anti- emetic effective ? Cisplatin, an antineoplastic used to treat cancers and tumors through chemotherapy, is a drug that consistently causes nausea and vomiting.

In a study on dogs, scientists have found that acetone and alcohol extracts of ginger have anti-emetic properties against vomiting caused by Cisplatin.

According to the report, the ginger juice is much more effective than other extracts used to improve gastrointestinal side effects during cancer chemotherapy.

Fresh ginger juice can also be used to address nausea and vomiting during pregnancy or caused by motion sickness.

Most clinical studies have shown that taking one gram of ginger one hour before surgery appears to reduce the nausea and vomiting during the first 24 hours after surgery. One study found that ginger reduced by 38 % the symptoms of nausea and vomiting.

Some research shows that ginger can reduce the symptoms of painful menstruation in some women when taken during the days of menstruation.

A study shows that taking 250 mg of ginger extract specific (Zintoma, Goldaru) 4 times daily for 3 days at the beginning of the menstrual period reduces the symptoms of painful menstruation in 62% of women.

In this disease, the benefits of ginger are similar to anti-inflammatory drugs such as ibuprofen and mefenamic acid (Ponstyl ®, Ponstan ®).

Ginger root contains sesquiterpenes which have very beneficial antiviral properties for treating colds. The common cold or postnasal drip is a common infectious disease of the upper airway caused by several types of viruses including rhinovirus. Among the sesquiterpenes in ginger is beta-sesquiphellandrene, which has proved to be the most effective molecule against rhinoviruses.

A study at the American University ‘Georgia State University’ (Atlanta), showed that the whole ginger extract is able to reduce the size of prostate tumors in mice by 56%. The anticancer properties of ginger have been observed in addition to its action on reducing the phenomenon of inflammation associated with prostate tumors. Scientists have discovered that ginger can kill cancer cells in two different ways.

In the first process, apoptosis: ginger would be implied by the emission of a signal which induces cancer cells to kill themselves, while leaving the surrounding healthy cells intact. In the second process, autophagy, ginger acts on cancer cells so they eat themselves.

« Ginger can be a promising remedy in the treatment of breast cancer, » the researchers conclude.

Other studies suggested that the active ingredients present in ginger extract have the capacity to fight against other cancers, including cancers of the colon or rectum, liver, lung, pancreas, prostate and skin.

The American scientific journal « Journal of Gastroenterology and Hepatology » in December 2010, reported that the active components of ginger inhibit the expression of pro-inflammatory chemokines that contribute to the formation of gastric and duodenal ulcers.

Furthermore, ginger showed its protective effects on the gastric mucosa by supporting the antioxidant activity of some enzymes such as xanthine oxidase and myeloperoxidase.

Another study published in the journal « Indian Journal of Pharmaceutical Sciences » published in 2009 showed that ginger also protects gastric ulcers caused by aspirin.

Caution: ginger should not be consumed when the stomach is empty! The University of Maryland Medical Center suggests taking ginger supplements in capsules if you experience gastrointestinal disorders..

Side Effects and Warnings against the medicinal use of ginger

For most people, the recommended doses, taking ginger (Zingiber officinale) in fresh or in powdered form as capsules, in tablets, syrup and tea, shows no troublesome side effects (rarely mild gastrointestinal troubles). However, there are some contraindications to be taken into account:

• Lactation: Since there is no medical information on this subject, some women prefer to avoid ginger during lactation.

• Children: Ginger is generally not recommended for children less than two years.

• Gallstones: Ginger is not recommended for patients who suffer from gallstones.

• Externally: When ginger is applied to the skin, it can cause irritation.