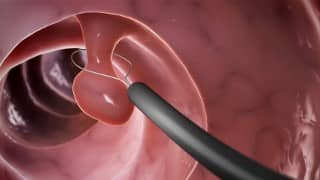 What is a colon polyp ?

Polyps of the large bowel cancer are they ? What are the different types of polyps and how do we distinguish them ?

What are the symptoms of the presence of a colorectal polyp ? How is a colon polyp diagnosed, and what are the screening tests ? How can one treat colon polyps ?

Is it possible to prevent the occurrence of polyps in the large intestine ? Is there a natural remedy for this ?

Polyps of the Colon or Rectum – Definition

Polyps are abnormal tissue growths that develop on the inner layer or lining of the large intestine (colon) and rectum. The presence of numerous polyps on the same mucosa is called polyposis. Some polyps are flat, while others have a stalk. Their diameter may vary between 2 mm and 5 cm. Polyps are one of the most common problems affecting the colon and rectum. In our societies, these growths occur in 15-20 % of adults.

Colon Polyps – Are They Cancerous ?

Most colon polyps are benign, meaning that they are not cancerous. But some types of polyps, usually the adenomatous type (see below), can become a cancer. Flat polyps can be smaller and more difficult to see and are more likely to be cancerous than the mushroom-shaped-ones. The time required to produce the adenoma – cancer transformation is more than 5 years, with an average of 10-15 years.

The classification of polyps is done according to the results of the histology or the study of the structure of tissues and cells which compose and how they develop.

Results of histology of the colon :

1) NEOPLASTIC EPITHELIAL POLYPS and ADENOMATOUS POLYPS OF THE COLON

The tubular adenoma (75 to 90 % of adenomatous polyps), are covered with a cylindrical lining (tubular) undifferentiated. They are usually pedunculated, their surface is flat and they secrete little mucus. The tubular adenomas can sometimes, but very rarely, generate cancer. If polyps larger than 2 cm in diameter, the risk of becoming cancerous is around 30%.

The villous adenoma (1-5 % of adenomatous polyps) is generally large and sessile (flat). Its granular surface reproduces intestinal villi with a hairy appearance. It secretes a lot of mucus and bleeds easily. This type of polyp is located in the left colon. At an equal size, the villous adenoma is more apt to degenerate into a tubular cancer polyp.

Lipoma : The lipoma is a rare benign tumor composed of fatty tissue.

The hemangioma is a benign colon tumor that develops dependent on the blood vessels.

Juvenile polyps affect 1-2 % of older children and adolescents. When the polyp is isolated, there is little risk but when hereditary and multiple (about one third of cases) the risk of developing colon cancer is 10%.

Polyps of Peutz-Jeghers syndrome, meanwhile, are sometimes found in the small intestine (jejunum-ileum), which makes them more difficult to diagnose because they are not accessible with conventional endoscopic fiber-optic exploration. Polyps of the small intestine can cause symptoms of intestinal obstruction (blockage of the intestine) or abdominal pain. The risk of cancer is rare but can be linked to the degeneration of the polyps.

This type of polyps found in the case of chronic inflammatory diseases (ulcerative colitis and Crohn’s disease). These pseudo-polyps are completely harmless, but can sometimes be confused with adenomatous polyps.

The hyperplastic polyp is usually not malignant, but it was recently discovered that it could be precancerous if developed in the right or ascending colon.

Identification of colon polyp according to its form :

1) Pedunculated polyps : They have the form of a mushroom with a cap and sometimes wide and short stem, sometimes long and thin.

2) Sessile polyps : Unlike pedunculated polyps, sessile polyps are attached directly to the mucosa, it has no stalk or stem. It has a wide and rather flat base of implantation.

What are the Symptoms of Colon Polyps ?

Most people with intestinal colon polyps do not have symptoms. However some people have some symptoms. Some adenomas may bleed less than 5 % of patients with polyps may notice blood in the stools: stools are black (melena) or blood may appear as red streaks. The villous adenoma can produce large amounts of mucus that is excreted as false diarrhea. If polyps are large, beyond 2 cm in diameter, they can create some obstruction of the colon causing abdominal pain and constipation.

If you have any of these symptoms, see a doctor to identify the cause of the problem.

Who are the People most Prone to Colon Polyps ?

Anyone can have intestinal polyps, but certain people are more likely to develop than others.

You may also be more likely to get colon polyps if: you eat a lot of fatty foods, you smoke, you drink alcohol, you do not do physical exercise or are overweight.

The doctor may use one or more tests to check for colon polyps.

• Barium enema : The doctor injects a little cannula of a fluid called barium (a contrast radiopaque) into your rectum before taking x rays of your large intestine. Barium makes your intestine white on the images or radiographs. Polyps are dark, so they are easy to see.

• Sigmoidoscopy : Sigmoidoscopy is an examination of the rectum and colon. Gastroenterologist inserts a sigmoidoscope, (a bright, thin, hollow and flexible tube) in your rectum through which he can explore the sigmoid segment, a segment of the intestine just upstream of the colon (the last third of your large intestine).

• A colposcopy or colonoscopy : Colonoscopy is a visual examination of the colon by means of a fiber optic probe or one equipped with a camera that shows images on a video screen, a fuller exploration than that of a sigmoidoscope. The examination may be conducted under general anesthesia or light sedation. The tube has a tool that can remove polyps. The doctor usually collects small pieces of mucosa (biopsy) during colonoscopy for laboratory analysis.

• Computed tomography or CT : The CT scanner is a scanner connected to a computer that measures the X-ray absorption by the tissues of the large intestine before scanning and reconstructing the images in 2D or 3D anatomical structures. The images of the scanned portion correspond to sections of a thickness of 1 to 10 millimeters.

• Stool Analysis : The Hemoccult II ® (blood culture) can detect microscopic blood in the stools (mystery blood). The presence of blood suggests the existence of a lesion or polyp (s) in the colon or rectum. In case of a negative test (97 % of cases), the person is asked to repeat this screening two years later.

In most cases, the doctor removes colonic polyps in a sigmoidoscopy or colonoscopy. Polyps are then examined to see if they are cancerous. If you have colon polyps, the doctor will want to get them tested regularly in the future.

Most polyps or benign tumors may be removed at the time of a colonoscopy. This is a small endoscopic surgery. A technique often used is to insert a handle through the colonoscope (loop of a special wire). Wire surrounds the stem of the polyp which then pulls it towards the center of the lumen. The gastroenterologist uses an electrical current (electrocoagulation: 15 to 20 W for 10 to 15 seconds) to cut the tumor tissue and coagulate blood vessels. Polyps removed are examined microscopically to ensure that they do not contain cancer cells. It is a safe, painless method, but one which can still have the risk of perforating the wall of the intestine (0.33 % of polypectomies)

If the polyp is very large (diameter of over 4 cm), the base level of the intestinal wall is very wide or the tumor is not accessible to the endoscope, it will be removed by means of a conventional surgery. The operation involves opening the abdomen to remove the segment of intestine that contains the polyp and reconnecting the two cut ends (anastomosis).

Family of adenomatous polyposis or FAP is a rare inherited disease that predisposes to colon cancer.

Allopathic medicines : Sulindac ® (Arthrocine) administered throughout the course, at a dose of 100-400 mg per day in patients with familial polyposis coli leads to a decrease in the number and size of polyps. It is the same with selective inhibitor drugs or COX-2 coxibs (celecoxib ®) and eicosapentaenoic acid (EPA). Aspirin administered at a dose of 600 mg per day decreases the number of colorectal cancers in Lynch syndrome.

An interesting result which tends to demonstrate that the consumption of onion and curry is a food asset to fight against the development of certain cancers and polyps.

Has it been over a week since you’ve gone to the bathroom? Do you have such a bloated stomach that you look 4 months pregnant? Are you tired of going to your doctor only to get more laxatives? Do you have embarassing gas? If so, this may be the most important letter you’ve ever read…

Discover the 7 most common causes of constipation that every woman should know and avoid. Naturopathic doctor reveals 37 Strategies that women can use to rid themselves of constipation, gas, bloating and resulting fatigue.

This is not simply some long, laundry list of natural remedies you’ll need to spend hours reading through, debating over which you think will work best for you. This is a specific, well-outlined plan. Depending on what condition your digestive system is currently in, you could achieve relief almost immediately or by the end of the next day.

The GOOD NEWS is you WILL be relieved and feel incredibly better within 24 hours. Many achieve relief after just the initial stage or “Phase 1,” but we know everyone is different. It has been by keeping that important principle in mind that this plan has been carefully created; it is prepared to tackle even the very worst case scenario.