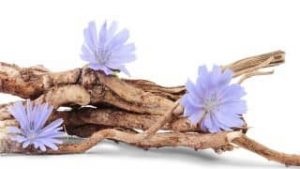 Chicory or bitter chicory (Cichorium intybus) is a plant belonging to the family Asteraceae, very close to the dandelion. It is commonly called : grass coffee and farmers hair. It is grown for both its leaves (culinary use: in salads) and roots (coffee substitute).

Did you know that this plant has many medicinal properties? In this article, we will discover 6 benefits attributed to chicory, especially to its roots. We will discuss the following health problems: diabetes, digestive problems, insomnia, biliary deficiency, liver poisoning and irregular periods.

To discover other benefits of chicory, please click on the blue links at the end of this article.

Make a decoction by boiling 30 g of sectioned and dried chicory roots in a liter of water. Drink 2 cups of this tea per day.

Called dyspepsia or dyspepsia a group of symptoms characterized by epigastric pain, heartburn, bloating, nausea, a feeling of postprandial fullness or early satiety.

The bitter chicory is a plant for the digestion since it acts as a gastric tonic which stimulates the production of gastric juices thus facilitating digestion.

Furthermore, the chicory roots contain prebiotic oligosaccharides. Dietary fiber such as inulin and FOS (fructo oligosaccharides) contained in chicory are not digested in the small intestine and play an interesting therapeutic role because they nourish and stimulate the growth of certain beneficial bacterial strains for the colon and for the health of the host.

Prepare a decoction of 30 g of dried and ground roots per liter of water. Drink a cup before eating.

Bitter chicory contains 2 active ingredients that act on the nervous system and act as sedatives and analgesics: lactucopicrin and lactucin .

Experience has shown that by mixing powdered chicory root in hot milk, a relatively effective traditional remedy is obtained to treat insomnia and anxiety.

Chicory is a plant with choleretic properties, that is to say able to increase and facilitate the secretion of bile (the liquid involved in the digestion of fat ) by the liver.

Chicory helps to empty the gallbladder and helps remove fats from the intestines.

Prepare a decoction of 30 g per liter of water crushed dried roots. Drink from a cup before breakfast.

In the August 2010 issue of the American magazine « Food and Chemical Toxicology » describes a scientific study to prove the beneficial effect of chicory on a poisoned liver.

In a laboratory, researchers rats divided into four groups and were fed in a different way for 8 weeks.

The rats of the first group received a supplementation of chicory in their daily food. The rats of the second group were subjected to two toxicants, sodium nitrite and chlorpromazine in order to induce liver damage. The third group of rats received the same toxic than the second group, but supplementation with chicory. The rats in the last group received a normal diet and were used as a comparison.

The results showed that the liver of the rats in the second group was severely damaged unlike the rats in the third group . The authors concluded that chicory should be considered as a natural remedy to prevent and treat liver damage caused by toxic substances.

Traditionally, a decoction of the seeds of the chicory plant is used to treat irregular periods.

It seems that the bitter chicory could cause unscheduled periods. Until now, no studies have confirmed this.

According to Dr. Linda B. White, chicory associated with coffee can stimulate the uterus, causing uterine contractions and bringing menstrual periods. This is why pregnant women should refrain from chicory to avoid abortion or miscarriage.

Side Effects and Warnings against chicory

Sesquiterpene lactones contained in the plant are allergenic substances. For some people physical contact with the chicory plant causes contact dermatitis. Furthermore, the chicory may sometimes cause a rash when taken orally. Chicory can also induce asthma attacks.

Chicory interacts with certain drugs and other medicinal plants. Chicory may interact with drugs that are metabolized by the cytochrome P450 enzyme.

Two examples of drugs that are metabolized by this enzyme is metoprolol (beta-blocking) and tramadol (analgesic). The use of chicory decreases the levels of these drugs in the blood, and therefore their effectiveness. Furthermore, chicory greatly increases calcium absorption.

Chicory should not be consumed if you are pregnant or breast-feeding a baby. Chicory is also known to have abortifacient effects. This means that taking chicory during pregnancy can induce a miscarriage.

If you have gallstones, it is strongly recommended to consult a doctor before consuming decoctions of chicory roots, given that this herb stimulates daily bile production.