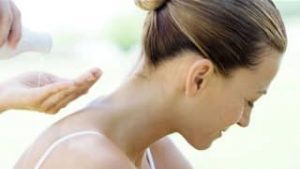 Scientists attribute its antibacterial and anti-fungicidal properties to an unusual chemical composition: ricinolein, a triglyceride of ricinoleic acid which constitutes more than 90 percent of the fatty acids of castor oil.

In addition to its antiseptic virtues, castor oil also has anti-inflammatory properties, which are associated with the growth of healthy hair.

Have we strong reason to believe that castor oil is an essential natural product for all those who care about the health of their hair ?

I invite you to discover the 7 major benefits of castor oil as part of a home hair treatment.

1. The benefits of castor oil on the hair’s shine

Researchers have studied the reflection of light on hair samples and found that the effect of castor oil on the hair: it increases its ability to reflect light, the hair becomes brighter. This property of the castor oil is due to the fact that it covers the capillary stem and seals the moisture on its surface creating a silky appearance on the surface.

If you have dull hair, do not hesitate to use castor oil to increase the shine and luster of your hair. Some women use castor oil as a conditioner. After shampooing, they apply a small amount of pure castor oil on the still damp hair until it is evenly distributed

2. The benefits of castor oil on the scalp

3. The action of castor oil against hair loss

1. The antifungal and antibacterial properties of castor oil properties are very useful in preventing infections of the scalp, such as folliculitis (the inflammation of hair follicles caused by a bacterium) or ringworm (when the scalp is attacked by a microscopic fungus). Castor oil thus prevents the massive hair loss caused by such diseases.

2. Studies in rabbits partially shaven have shown that castor oil stimulates hair growth. Indeed, during the 35 days of treatment, the hair of rabbits grew between 18 and 25 mm longer than those rabbits that received no hair care.

3. The omega-9 content in castor oil nourishes the hair and scalp, which prevents it from drying out. Rubbing castor oil on the scalp and hair roots regenerate the growth of new hair in a few months.

4. Castor oil thickens the hair and adds volume to the hair

Many people who claim to have hair that is thin, without volume and difficult to comb. To restore volume to your hair, there is nothing like regularly treating it with castor oil.

During the study on rabbits (see above), the researchers noticed that the hair diameter was increased from 6 to 20 microns (0.006 mm to 0.020 mm), indicating that castor oil has acts as a thickener on the hair shaft. Incidentally, the diameter of a human hair ranges from 40 to 100 micrometers.

Of course, there are thickening styling mousses on the market to give more volume to the hair, but I still suggest you try first castor oil, which is more natural and healthy!

5. The benefits of castor oil on split ends

As part of a conditioning treatment, castor oil can help greatly to reduce split ends. Omega-6 essential fatty acids, vitamin E, certain proteins and other nutrients contained in castor oil penetrate the cuticles of dry and damaged hair, helping to revitalize the hair shaft and helping to keep hair at a normal humidity.

Castor oil has a viscous consistency, so mixing it with lighter oils such as olive oil or jojoba oil is a good idea because it facilitates a uniform distribution in hair care.

Insufficient production of sebum can make the hair dry, weak and brittle. Sebum is not the only factor contributing to the dryness of hair. The effect of sun, wind and pollution rob the hair of moisture needed by making it less elastic.

As we have previously commented, castor oil naturally moisturizes the hair giving it the flexibility and suppleness it needs.

7. The benefits of castor oil to combat dandruff

Castor oil has antibacterial, anti-fungal, and insecticidal properties, which gives it the power to effectively treat many causes of dandruff.

In addition, the dandruff are usually associated with a dry scalp, so castor oil acts as an excellent moisturizer for the scalp.

If you have dry scalp and if you have the problem of dandruff, apply castor oil directly onto dry areas prior to shampooing.

Press The Rewind Button On Aging From the Inside-Out

Master a powerful, anti-aging Shiatsu routine that helps generate lymphatic circulation and gives you a natural facelift. (You won’t believe how easy it is to diminish that swelling around your eyes… or the puffy, blotchy complexion that drives you crazy.)

➤ Press The Rewind Button On Aging From the Inside-Out