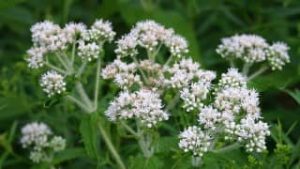 Boneset is a medicinal herb from the Northern American continent that belongs to the family of asteraceae and known scientifically as Eupatorium perfoliatum.

An infusion of Boneset is an herbal and alternative medicine that helps the body fight off infections. This natural home remedy has been reported to help cure the painful symptoms of flu and prevent pulmonary complications.

1) Influenza description : Influenza, more commonly known as flu, is an extremely contagious respiratory infection (nose, throat and lungs) caused by RNA viruses. There are 3 types of flu viruses (Influenza Type A, B and C) which mutate frequently. The flu spreads rapidly from person to person when in close contact by air-born droplets carried in a cough or a sneeze.

There is some scientific evidence that the boneset plant (Eupatorium perfoliatum) treats the flu. Boneset was listed as an herbal remedy for fever in the U.S. Pharmacopoeia from 1820 through 1916. During the lethal 1918 influenza pandemic, boneset proved to be beneficial in reducing the painful symptoms of flu.

German plant researcher H. Wagner has shown that sesquiterpene lactones and polysaccharides in boneset plant have immune-stimulating properties, ten times as potent as those from echinacea. It has been reported that xyloglucurans from the polysaccharide fractions of aqueous extracts of boneset increased phagocytosis by a factor of 1 to 2.5 in the carbon clearance and granulocyte test.

Phagocytosis is a process which is used by cells to destroy and ingest dead or foreign cells. The immune system is designed to protect our body from foreign invaders like bacteria, viruses, toxins and parasites. With a strong immunity our body can easily fight cold, flu and other such infections.

Terpenoids and flavonoids found in boneset have been shown to exert antibacterial and anti-inflammatory properties.

The root and occasionally the leaves are infused as a treatment for common cold and mild flu with fever, chills, phlegm and coughing.

Boneset plant may contain chemicals called pyrrolizidine alkaloids which can produce damage to the liver. Patients with liver disease should avoid boneset and no one should take it over a long period (for longer than six months).

Don’t use it if you are pregnant or breast-feeding!

Small doses of it may have diuretic and laxative effects.