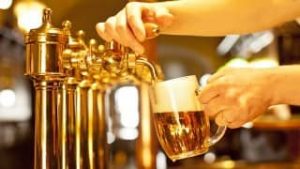 You like beer and you wonder if moderate drinking is good or bad for health.

Moderate beer consumption and its effects on human health and nutrition is a topic that has recently been discussed, during the 11th Congress of the European Federation of Nutrition (FENS ) which takes place in late October 2011, in Madrid, Spain.

Various experts in medicine and nutrition have described the effects of beer on the body. Scientific research has allowed us to understand that beer exerts beneficial effects on the cardiovascular and skeletal system. Moderate beer consumption may also increase the production of antioxidants in breast milk and can help to reduce the metabolism of the normal sports in harsh conditions. Beer also has therapeutic properties to prevent certain infectious diseases.

1) The virtues of beer against infectious diseases

The 11th Congress of the FENS, Dr. Marcos Ascension, explained that a study of 57 human volunteers showed that moderate consumption of beer can enhance or boost the immune response of the body against the pathogenic agents responsible for infectious diseases.

How can beer strengthen the human immune system? When consumed within reasonable limits, the beer affects the body by increasing the number of leukocytes or white blood cells, particularly the sub-population of T lymphocytes.

2) The benefits of beer on the bones, muscles, tendons and blood

During this same Spanish Congress, Dr. Jonathan J. Powell discussed the virtues of beer on the skeletal system.

The beer is a rich source of organic silicon (6.4 to 56.5 mg / l depending on the type of beer), a mineral that plays an important role in bone health. Silicon promotes growth, mineralization and bone density.

Half a glass of beer could be said to fight against osteoporosis. Furthermore, the silicon in beer improves flexibility and mobility of muscles, joints and tendons. Professor Powell added that the ethanol present in beer also reduces bone loss.

The silicon content in beer increases the number of erythrocytes or red blood cells in the cardiovascular system. Vitamin B12 in beer also has anti-anemic properties.

3) The benefits of beer on the cardiovascular system

The 11th Congress of the FENS, Dr. Ramon Estruch presented the main findings of the clinical study entitled ‘ Beer, Mediterranean diet and cardiovascular disease ‘ which is part of PREDIMED (Prevention Mediterranean Diet ) project.

This may seem surprising, but the investigation by the researchers indicates that consumers of beer in Spain generally used to eat more fresh vegetables, pulses, fish, cereals and olive oil than non-beer drinkers. This power is known as the Mediterranean diet, a diet that prevents heart disease.

Dr. Maria Teresa Aguilar Hernández, a pediatrician at the Health Agency of Valencia presented scientific evidence at the Congress of Madrid, that alcohol-free beer is good for the nursing mother’s health. The study was conducted on a group of 80 lactating women. Half the group followed a conventional scheme while the other half was instructed to drink an extra 2 alcohol-free beer every day for 30 days.

Dr. Hernández commented: « We have determined the antioxidant capacity of breast milk at three different stages of lactation depending on its stage of development: at the beginning (milk called ‘ colostrum ‘), after 15 days (transition milk) and after one month (mature milk). »

Normally, a consistent decrease is observed in the antioxidant activity of human milk overtime as it transforms from milk colostrum and transition milk to mature milk. However, in nursing mothers who drink non-alcoholic beer, there is a much faster decrease in oxidizing power of the milk, much slower and less weighty, said Dr. Hernandez.

Antioxidants protect the milk from oxidation and complement the antioxidant defense system of the still-developing newborn.

5) The virtues of beer on athletes’ recovery

Dr. Manuel Castillo Garzón, a professor at the University of Granada, said during the conference that beer may play a role in the recovery of athlete’s metabolism.

A study helps us to understand that moderate beer consumption may help to maintain higher levels of glucose or sugar in the blood of the athlete and reduce hormonal responses to stress.

Beer is rich in maltodextrins, carbohydrates which are of great interest in sports nutrition. These carbohydrates prevent the onset of hypoglycemia, as they have the advantage of being slowly metabolized in the body, releasing glucose units which pass gradually into the bloodstream.

According to Professor Castillo, moderate consuming alcoholic or non-alcoholic beer after strenuously exercising in a hot environment helps the athlete to recover the water and minerals lost due to stress, heat and perspiration.